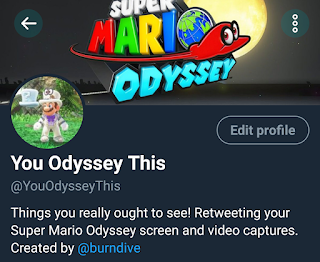 I made yet another Twitter bot: @YouOdysseyThis. It does the same thing that @SheikahMemories does for Breath of the Wild, but for Super Mario Odyssey.
All I had to do was modify a few strings and create the account, so I was able to do it all on my phone from a thousand miles away. My laptop isn't working, so my phone is all I have right now.
As of right now it's having trouble keeping up with real time , since there are so many people playing the game and posting their screenshots and videos. Hopefully this will settle down soon.
Enjoy!

Update: I've scaled it back so it only retweets a certain percentage of qualifying tweets, and that seems to be working.
Posted by burndive at 11:28 AM No comments: 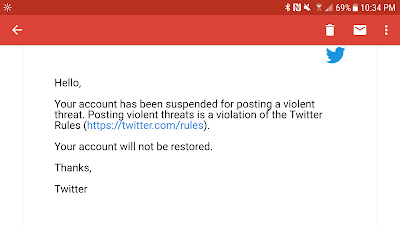 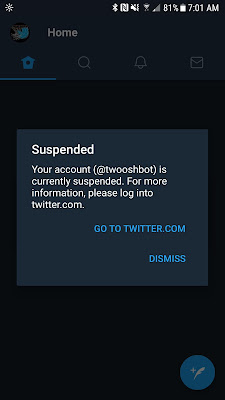 Posted by burndive at 8:55 AM No comments:


When I first started playing Breath of the Wild on the Nintendo Switch, there was an account that would (intermittently) retweet all of the pictures posted by players.  Actually it was simpler than that.  It would retweet everything with media and the #BreathoftheWild hashtag.  It caught a bunch of re-posts and other junk, but it also captured people's cosplay pictures and fan art.

I used to have a column dedicated to this account on my Fenix Twitter app, and I would scroll through the screenshots and other content, and enjoy the community of like-minded fans.

Recently, that account has gone away, or rather it has been renamed and repurposed to retweet Nintendo Switch posts, regardless of the game.  These days, that means almost exclusively Splatoon 2, which is fine, but that's not what I'm in to right now.

So, after contacting the developer to see if they would reinstate the functionality (and receiving a negative reply), I thought, "Well, I already have a Twitter bot, this should be easy."

I haven't written the bot yet, but I've created the @SheikahMemories account.

Note: I've since replaced the Twitter list following the account with a saved search for the #BreathoftheWild hashtag, but not everyone uses an app that can do that, and once I had the idea, It got legs of its own and I'm kind of excited to implement it, whether or not it's strictly necessary.
Posted by burndive at 4:20 PM No comments: